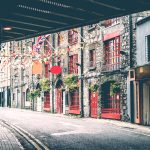 Greetings traveler! Welcome to the green capital of shamrock!

In Dublin’s Fair City, we will discover the town’s Viking past, starting with the city hall, then moving on with the Dublin Castle. After taking a brief look at the Medieval Harbor, we’ll visit the lovely St. Patrick and Christ Church Cathedrals and the gorgeous area surrounding those.The largest city of Ireland has Celtic roots that go back over a thousand years. For a brief time, it was the largest trading center of the Viking world, sailing the seas all the way from Iceland to Constantinopole. After their adoption to Christianity, the Vikings left their homelands to the Normans, who adorned the city with glorious buildings like the Dublin Castle, Christchurch and St. Patrick’s Cathedral. And these buildings found their rightful places in the following Georgian period when the architecture of the whole city was changed. Throughout these years, both the British and the Irish tried to make sense of the beauty of Ireland. The high-spirited nature of the Irish people were challenged by wars, famine and poverty. Yet the harsh conditions of Ireland nourished some of the most important literary figures of the world like Samuel Beckett, George Bernard Shaw and W.B Yeats. They described the beauty of green shamrock, shrouded in the fog and rain. They became the sound of the proud Irish nationality which paved the way to the Republic of Ireland…

Allow me to describe you the beauty of my city. You’ll see that the Irish tunes we sing and the Irish humor we laugh at have a charm you haven’t noticed before.